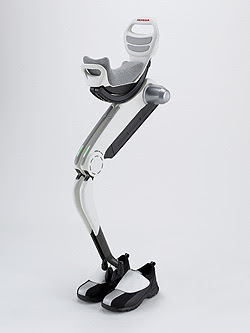 Honda Motor Co., Ltd. unveiled its second experimental walking assist device that helps support bodyweight to reduce the load on the user's* legs while walking, going up and down stairs, and in a semi-crouching position. Honda will now begin testing the device in real-world conditions to evaluate its effectiveness.

The new walking assist device with the bodyweight support system reduces the load on leg muscles and joints (in the hip, knees, and ankles) by supporting a portion of the person's bodyweight. The device has a simple structure consisting of seat, frame, and shoes, and the user can put it on by simply wearing the shoes and lifting the seat into position. Moreover, a mechanism that directs the assisting force toward the user's center of gravity and the ability to control the assist force in concert with the movement of the legs – both unique Honda innovations – make it possible for the device to provide natural assistance in various postures and motions. 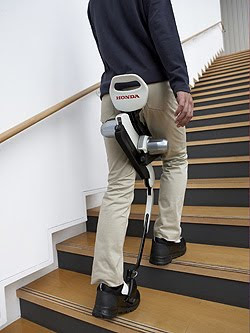 ■ Key Features 1. Convenient sitting-type device
· The user simply needs to wear the shoes and raise the seat into place.


· The user can benefit from the assist without need of a belt to fasten the device to their body.


· The structure to position the device between the user's legs minimizes the required footprint, therefore making it easier for them to maneuver.

2. Method to assist bodyweight support
· The device will support a portion of the person's bodyweight by lifting the seat as the frame between the shoe and seat bends and extends, just like knees, with the force from the motor. As a result, the load on leg muscles and joints (in the hip, knees, and ankles) is reduced.


· Honda developed a unique mechanism where the seat and frame follow the movement of the body and legs. The assisting force will be directed toward the user's center of gravity, just as with human legs, which enables the device to provide assistance in various movements and postures including walking, going up and down stairs, and in a semi-crouching position.

3. Natural control of the assisting force
· Natural walking is achieved by changing the amount of assisting force applied to the right and left legs through the control of two motors based on the information obtained though sensors imbedded in the shoes of the device.


· The effectiveness of the device was increased in those motions and postures which put increased load on knees, such as going up and down stairs and in a semi-crouching position. This was achieved by adjusting the assisting force in accordance with the bending and stretching motion of the knees.

Weight 6.5kg (including shoes and batteries)
Drive system Motor X 2
Battery pack Lithium ion battery
Operating time per charge 2 hours (including walking and in a semi-crouching posture, etc.)
Suitable height of the user Within plus or minus 5cm of the set height
(Example: set height for Medium size is 170cm)