While electronic books and texts may be the wave of the future, Japanese researchers have developed a literate, child-sized robot capable of reading old-fashioned paper-printed books. 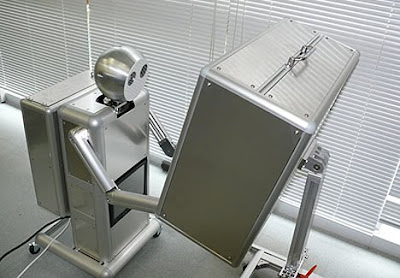 
Ninomiya-kun, a 1-meter-tall, 25-kilogram aluminum-framed robot developed at Waseda University’s Information, Production and Systems Research Center (IPSRC), was unveiled on June 11 at a robot trade fair in Kitakyushu, where it entertained onlookers by reading fairy tales from a book.

The robot, which was developed jointly with the Kitakyushu National College of Technology and Shanghai Jiao Tong University, reads by training its camera eyes on printed materials placed on a special book stand. Character recognition software installed on a computer in the robot’s backpack translates the text into spoken words, which are produced by a voice synthesizer.

Although Ninomiya-kun still sounds like a machine, the developers are working to give its voice more feeling. After that, they believe the robot will be ready to read books to children and the elderly for a living.

With the ability to recognize over 2,000 kanji, hiragana and katakana, Ninomiya-kun can currently read elementary texts. The developers say they plan to upgrade the machine’s camera eyes to enable it to read more complex characters in the future.

Ninomiya-kun takes its name from Kinjiro Ninomiya, a popular 19th-century agricultural leader and philosopher who was born poor but became a great landowner through hard work and perseverance. Statues of Ninomiya typically show him reading a book while carrying a load of firewood on his back. The android shares Ninomiya’s love of books, but it packs a computer on its back instead of wood.