Relax And Chat on the Pillow Phone

Japanese mobile company Willcom have launched a new winter campaign that allows users to put their heads down and really relax while they have a conversation, on a pillow phone. 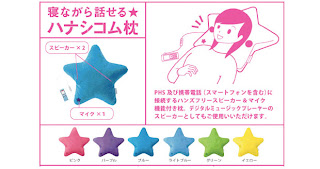 The network provider is giving away the “dare to demo pillow” (meaning “with anyone”) headsets free to those who sign up to their services throughout the month of December.

The pillows come in a range of colors and allow users to rest their heads while chatting by plugging their handsets in. The star shaped pillows have built in microphones and speakers and users can also play back music on them as well as chat.

Unlike other mobile providers, Willcom deals solely with less popular PHS phones and recently also released a phone accessory that is a mobile phone.

The marketing efforts come in a bid to lure customers back to the company as users have rapidly declined over the years instead turning to smartphones or other mobile providers.